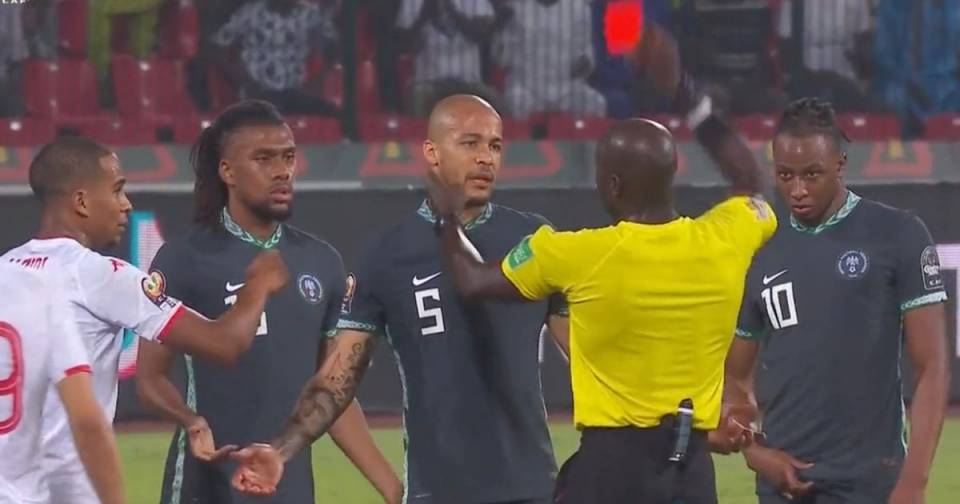 The Carthage Eagles of Tunisia defeated 10-man Super Eagles of Nigeria 1-0 in a round of 16 match played at the Roumdé Adjia Stadium in Garoua as captain Youssef Msakni's long-range strike sends Tunisia into Africa Cup of Nations quarter-finals despite missing seven players due to Covid.

Tunisia captain, Youssef Msakni powered home a low shot from outside the penalty area two minutes into the second half, Maskni found space to shoot from outside the box after beating a defender, Nigerian Shot-stopper Maduka Okoye had a touch on the ball, but was not enough from preventing a goal.

For a side that won all three of their group games and even rested the majority of the starting XI for their previous match, tournament favourites Nigeria looked out of ideas in the face of some heroic defending.

Nigeria’s Moses Simon, Wilfred Ndidi and Samuel Chukwueze had all missed chances early in the first half and there were few chances in the game with Tunisia producing a stout defensive performance while looking for counter-attacking opportunities. Msakni’s goal was the only difference separating both sides before Nigeria’s substitute Alexander Iwobi was sent off in the 66th minute, seven minutes after coming on.

The referee originally handed Iwobi a yellow card following a dangerous tackle but VAR called to review the sanction on the pitch side VAR screen, before changing his mind and sending Iwobi off. Despite playing with 10 men Nigeria had a chance to level after substitute Sadiq Umar had beaten the goalkeeper but his shot missed the target by inches.

The Carthage Eagles have only won the AFCON once in 2004 will now lock horns with Burkina Faso in the quarter final stage who beat Gabon 7-6 on penalties after a 1-1 draw in Limbe with 18 penalties needed to decide tie.