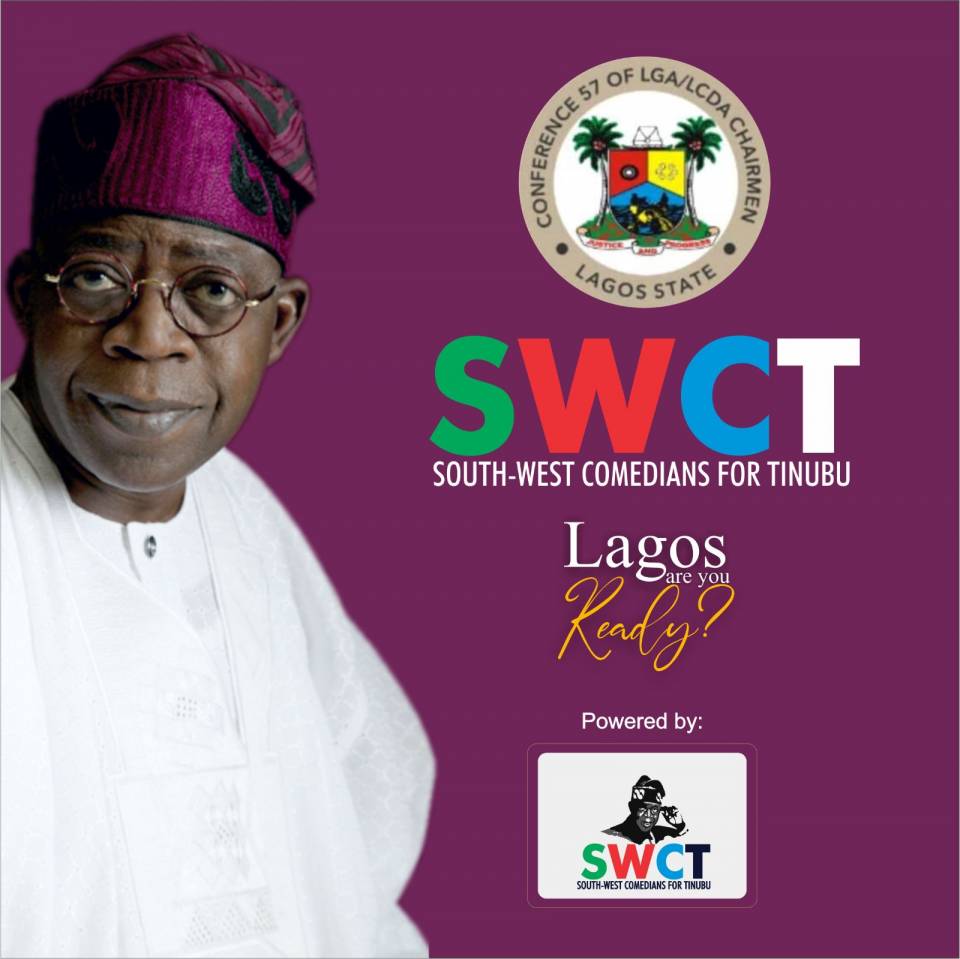 The reputable umbrella body of all the Chairmen in the twenty local government and thirty seven local council development areas in Lagos State called ‘Conference 57’ under the leadership of Hon. Kolade Alabi, the Executive Chairman of Bariga LCDA has put its weight behind the organizers of the now talk of the town South West Comedians for Tinubu (SWCT) to kick off  a unique movement to beat and copy which is an initiative strategic tool to mobilize, campaign and advocate for Asiwaju Bola Ahmed Tinubu (ABAT) and the All Progressives Congress (APC).

Information available revealed that the members of the 57 Conference were in support of the idea to give back to Lagosians and the electorates by supporting the brains behind the laudable project-South West Comedians for Tinubu aimed at creating a progressive campaign and political sensitization for Lagosians and the new electorates that are of age and expected to participate in the general elections come 2023.

Hon. Kolade Alabi, who is also the President of the Association of Local Governments of Nigeria (ALGON) and his satire members of Conference 57 are of the opinion that the anticipate mega free concert tagged- South West Comedians for Tinubu (SWCT) is a desired moving train that should be spread in different locations in Lagos State to propagate Asiwaju Bola Ahmed Tinubu, who is a core democrat, a nationalist and a leader who strongly believes in the Nigerian youths and the project of one united Nigeria.

According to Gbenga Adeyinka D’1st, who is the President of South West Comedians for Tinubu (SWCT), he stated that “It’s not just a comedy concert spiced with music but it is a necessary project created in order to galvanize support and outstanding votes for Asiwaju Bola Ahmed Tinubu (ABAT) and the All Progressives Congress (APC) like never before in the history of electioneering process by engaging the electorates and the youths in Lagos State and across the South West”.

Those in the known squealed that with the support of Conference 57 of LGA/LCDA Chairmen in Lagos State that the anticipated mega comedy concert is a huge success already.

For the record, the South West Comedians for Tinubu is a free open concert for all Lagosians with their Permanent Voters Card (PVC) irrespective of their political party affiliation BUT it’s no doubt a movement is to sensitize and enlighten cerebral youths and electorates in Lagos State and the entire South West through well tailored comedy shows with jokes that are carefully crafted by the shortlisted South West comedians that are part of the project to propagate the agenda of Asiwaju Bola Ahmed Tinubu (ABAT) and why they need to vote for the All Progressives Congress (APC) at the general elections come 2023.

Working in-concert with the tested and trusted Conference 57, the organizers intend to kick off in Lagos State in the month of September 2022 before moving to other States in the South West progressively.

South West Comedians for Tinubu (SWCT) is predicated on the best ingenuity to give young people in the South West a platform for expressive edutainment and also encourage them to follow their dreams and vote wisely for a greater Nigeria.