Some members of the Peoples Democratic Party (PDP) are mounting pressure on the party to change its name, THISDAY can authoritatively reveal.

Two senior members of the party who confided in THISDAY said they preferred to speak anonymously to avoid sanctions from the party. According to them, the fortunes of the party were likely to improve during the next general election if the party adopts a new name.

According to them, “It will also enable more people, including those who left the party, the opportunity to join the party.”

He cited former Minister of Information, Professor Jerry Gana, as one of those who had privately expressed concern about the party’s name.

“I don’t know whether this is why he left for the Social Democratic Party (SDP) but I am convinced that his decision to leave must have been influenced by the issues bordering on the party’s name. It is not only Gana that is seeking a change of name. Many of the members of the party who had left and desirous of coming back to the party also want a change of name,” the source also added.

So far, those who spoke with THISDAY said the leadership of the party had consistently rejected the idea, saying the PDP is a brand that has done well for the country and still has what it takes to do better. When contacted, the National Publicity Secretary of the PDP, Kola Ologbondiyan, said the party welcomes ideas on how the party can succeed in the 2019 elections, stressing however that a change of name is not on the agenda of the PDP.

He said: We seek new ideas on how best to sell our party to the generality of Nigerians. But changing the name of our great party is not in contemplation of the organs of our party. Why do we need to change our name? Our party is rebranding, repositioning and more than ever ready for the 2019 election. We lost in 2015 not because we were called PDP but because the opposition party then tagged us with unprintable names. Today, we remain the most viable opposition in our country and we have carried out our duties to the country responsibly. Nigerians are rallying the PDP because they have seen through the All Progressives Congress (APC) lies and propaganda.

For us in the PDP, we will not change our name just because we lost election in 2015. In the Unites States of America, the Democratic Party has lost elections in its 190 years of existence but it has not changed its name. Also, the Republican Party has existed for 164 years without a change of name.

The PDP has lived for almost 20 years and lost election only once. Our rebranding is not about change of names but adopting democratic culture that meets best practices all over the world.

The PDP is striving to meet these practices on daily basis, and it has become responsive to the demands of members. Our party therefore has no need to change its name. 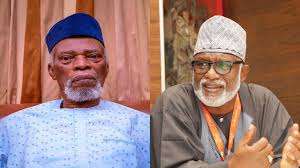